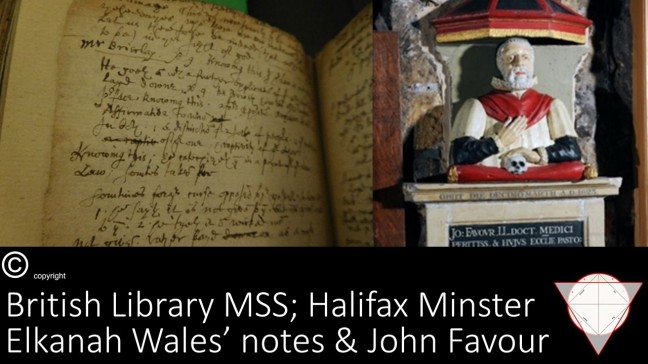 The notes for John Favour’s Halifax Exercise appear to have been written by the minister of Pudsey, Elkanah Wales, joint amaneuenssis of the Exercise with his brother, Samuel, the author of ‘Totum hominis, or the whole duty of a Christian’ (only posthumously published, 1627).

Elkanah was born at Idle in 1588 and attended Trinity College, Cambridge – as did his brother. He seems to have become the curate of Pudsey – between Leeds and Bradford – sometime around 1614, having originally been ordained as deacon in 1610 and as priest in 1611 – see Borthwick Institute AB3 ff. 409 v., 411 v. – becoming curate of Bramley and was a mainstream Presbyterian in his attitudes.

Elkanah seems to have been outstanding as a Puritan preacher. Newton claims that he may well have been more popular with those who travelled to hear him than many of those locally. Samuel became curate of Morley in the parish of Bentley – see J. Horsfall Turner – ‘Nonconformity in Idle’ (1876). Newton claims that the Halifax sermon notes – in spite of obvious changes in pen – are in the same hand throughout the years. That would rule out Samuel having been the main writer since he died in 1627.

They are not all as easy to read as the above – see the link below….